This guide includes the following sections:

The OPC DA Client module of the Edge One™ implements the OPC DA version 2.05a Specification as well as the OPC AE Alarms and Events specification. In addition, it supports the Percent Deadband option, which can be used with OPC servers with deadband support.

An OPC Client can connect to OPC servers provided by one or more vendors. Different vendors may provide OPC Servers. Vendor supplied code determines the devices and data to which each server has access, the data names, and the details about how the server physically accesses that data. 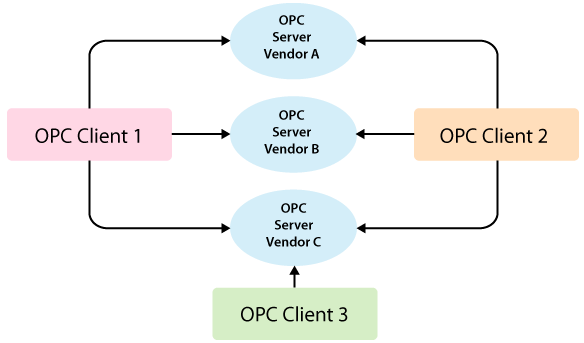 The OPC Groups provide a way for clients to organize data. For example, the group might represent items in a particular operator display or report. Data can be read and written. Exception based connections can also be created between the client and the items in the group and can be enabled and disabled as needed. An OPC client can configure the rate that an OPC server should provide the data changes to the OPC client. Within each Group the client can define one or more OPC Items.

The OPC Items represent connections to data sources within the server. An OPC Item, from the custom interface perspective, is not accessible as an object by an OPC Client. Therefore, there is no external interface defined for an OPC Item. All access to OPC Items is via an OPC Group object that “contains” the OPC Item, or simply where the OPC Item is defined.

There are three attributes associated with OPC DA item. These are

The OPC DA specification states that these three attributes have to be returned to an OPC client making a request. Therefore, if the data source is not capable of providing a timestamp, for example, the OPC DA server must create a timestamp.

Note that the items are not the data sources - they are just connections to them. For example, the tags in a DCS system exist regardless of whether an OPC client is currently accessing them. The OPC Item should be thought of as simply specifying the address of the data, not as the actual physical source of the data that the address references.

Although OPC is primarily designed for accessing data from a networked server, OPC interfaces can be used in many places within an application. At the lowest level they can get raw data from the physical devices into a SCADA or Distributed Control System (DCS), or from the SCADA or DCS system into the application. The architecture and design makes it possible to construct an OPC Server which allows a client application to access data from many OPC Servers provided by many different OPC vendors running on different nodes via a single object.

OPC is a specification for two sets of interfaces; the OPC Custom Interfaces and the OPC Automation interfaces. This is shown below.

There are several unique considerations in implementing an OPC Server. The main issue is the frequency of data transfer over non-sharable communications paths to physical devices. Thus, we expect that the OPC Server will either be a local or remote EXE which includes code that is responsible for efficient data collection from a physical device.

An OPC client application communicates to an OPC server through the specified OPC interfaces. OPC servers must implement the custom interface, and optionally may implement the automation interface if defined. An inproc (OPC handler) may be used to marshal the interface and provide the additional Item level functionality of the OPC Automation Interface. Refer to the figure below: Typical OPC Architecture.

It is also expected that the server will consolidate and optimize data accesses requested by the various clients to promote efficient communications with the physical device. For inputs (Reads), data returned by the device is buffered for asynchronous distribution or synchronous collection by various OPC clients. For outputs (writes), the OPC Server updates the physical device data on behalf of OPC Clients.

The OPC Custom Interface Objects include the following custom objects:

The interfaces and behaviors of these objects are described in detail in Chapter 4 of the OPC DA 3.00 Specification. Please refer to the OPC Foundation documentation for the specification for full details. The following sections provide a high level overview of these two custom interface objects.

The OPCServer object is the primary object that an OPC server exposes. The interfaces that this object provides include:

NOTE: Version 1.0 of this specification listed IEnumUnkown as an interface on the OPC Server. This was an error and has been removed. The semantics of QueryInterface do not allow such an implementation. The proper way to obtain a group enumerator is through IOPCServer::CreateGroupEnumerator.

For detailed information on each interface, refer to the OPC DA versions 2.0-2.05a specification.

The OPCGroup object is the object that an OPC server delivers to manage a collection of items. The interfaces that this object provides include:

The sections below describe the general properties of an OPC Group.

General Properties of a Group

The OPCGroup has certain general properties and behaviors which affect the operation of the Interfaces and Methods. These are discussed below.

Group names are Case Sensitive. Group1 would be different from group1.

The methods that use the interfaces described above, allow the client to specify that some operations can be performed on CACHE or DEVICE.

It is expected that most servers will implement some sort of CACHE.

The way the group functions described above behave differs slightly based on which source is specified. The actual details of the implementation of this functionality are up to the server vendor.

In practice, it is expected that most servers will make use of this flag to optimize their use of communications and CPU resources. Items and Groups which are not active do not need to be maintained in the CACHE.

It is also expected that clients will simply set and clear active flags of groups and items as a more efficient alternative to adding and removing entire groups and items. For example, if an operator display is minimized, its items might be set to inactive.

Refer to the Data Acquisition and Active State Behavior summary earlier in this document for a quick overview of the behavior of a client and server with respect to the active state of a group and items.

OnDataChange within the client’s address space can be called whenever any active item data in a active group changes, where “change” is defined as a change in value (from the last value sent to this client), or a change in the Quality of the value. The server can return values and quality flags for those items within the group that changed.(this will be discussed more in later sections)

The client can specify an update rate for each group. This determines the time between when the exception limit is checked. If the exception limit is exceeded, the CACHE is updated. The server should make a ‘best effort’ to keep the data fresh. This also affects the maximum rate at which notifications will be sent to the IAdvise sink. The server should never send data to a client at a rate faster than the client requests.

In addition, the server implementation would also be allowed to update the cached data available to sync or async read at a higher rate than 5 seconds if it wished to do so. All the update rate indicates is that (a) callbacks should happen no faster than this and (b) the cache should be updated at at least this rate.

The update rate is a request from the client. The server should respond with an update rate that is as close as possible to that requested.

This time zone information may rarely be used and the device providing the data may not know its local time zone. Therefore, it was not prudent to add this overhead to all data transactions. Instead, the OPCGroup provides a place to store a time zone which can be set and read by the client. The default value for this is the time zone of the host computer. The OPCServer will not make use of this value. It is there only for the convenience of the client.

Deadband will only apply to items in the group that have a dwEUType of Analog available. If the dwEUType is Analog, then the EU Low and EU High values for the item can be used to calculate the range for the item. This range will be multiplied with the Deadband to generate an exception limit. An exception is determined as follows: Exception if (absolute value of (last cached value - current value) > pPercentDeadband * (EU High - EU Low) )

If the exception limit is exceeded, then the last cached value is updated with the new value and a notification will be sent to the IAdviseSink (if any). The PercentDeadband is an optional behavior for the server. If the client does not specify this value on a server that does support the behavior, the default value of 0 (zero) will be assumed, and all value changes will update the CACHE. Note that the timestamp will be updated regardless of wether the cached value is updated.

The UpdateRate for a group determines time between when a value is checked to see if the exception limit has been exceeded. The PercentDeadband is used to keep noisy signals from updating the client unnecessarily.

This handle will be returned in the data stream to IAdviseSink. This allows the client to identify the group to which the data packet belongs. It is expected that a client will assign unique value to the client handle if it intends to use any of the asynchronous functions of the OPC interfaces, including IOPCAsyncIO, IOPCAsyncIOs, and IDataObject/IAdviseSink or IConnectionPoint/IOPCDataCallback interfaces.

There are basically three ways to get data into a client (ignoring the ‘old’ IDataObject/IAdviseSink).

In general the three methods operate independently without ‘side effects’ on each other.

There are two ways to write data out:

It is required that the server track each client’s group properties (update rate, deadband, active status, timezone, lcid) for a public group. For example, if two clients with different LCIDs want data from a public group, they can change the state of the group to reflect their LCID and the server must keep track of both.

The following table lists the features supported by each one of the OPC DA versions.

Still need help? Get in touch!